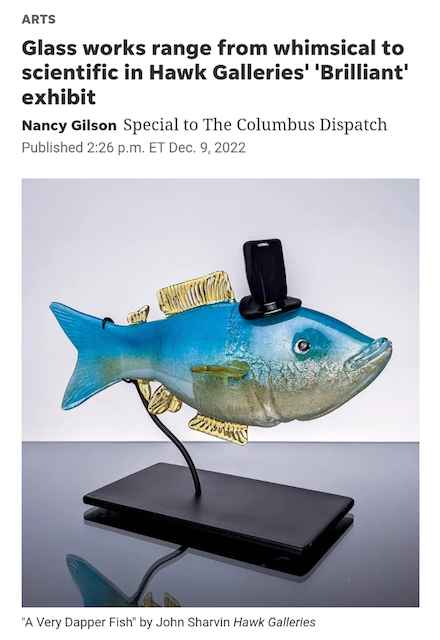 Born in Tulsa Oklahoma Conrad has been inspired by the tinkerers and repair people in his life. Finding the potential for shaping hot glass has led him to focus his works on different glassblowing and flameworking processes. Each work seeks to progress a prior technique forward in some way, keeping the work ever-changing. Conrad works as a production glassblower in Seattle where the work is never changing... (jk). He received a BFA from the Alberta College of Art and Design in 2012. Free time is enjoyed by taking his daughter and very understanding wife, to ride bikes on old railbeds and forestry roads sometimes finding sites of old lumber towns deteriorating and being overtaken by the bush. He was the 2019 recipient of the Jon and Mary Shirley Scholarship through Pratt Fine arts Center in Seattle.

Conrad Bishop enjoys the difficulty of crafting amorphous molten blobs of glass into elegant well made forms. He is heavily influenced by the historical glass as a benchmark of craftsmanship and excellence. In Conrad's words, "The history of glassmaking in an industrial, factory environment is reflected in these elegant contraptions that allude to having a function and yet are in reality completely useless. Conrad received a BFA from the Alberta College of Art and Design in 2012 and has returned to work in the states since 2015, residing in the Seattle area. Conrad was the recipient of the Jon and Mary Shirley Scholarship for 2019 through the Pratt Fine Arts Center where he has currently been focusing his making processes.

I enjoy the challenge of crafting glass and other elements into cohesive, intriguing, well-made sculptures. Each work seeks to progress a prior technique forward in some way, keeping the work moving in different directions, and spurring new ideas from the old. As a production glassblower I'm influenced by the industrial nature of the workspace with its corroded burnt surfaces, and grime, accentuating the luminous glossy nature of the glowing material. The works have become more complex adding little components and pieces which I can make at home during my daughter Rosies nap times., or during my work breaks.  While I make the pieces to explore this progression of the materials there are inevitably important things in my life that inform or underlie these objects.  The works are complex or even convoluted sometimes alluding to some important function, albeit a confusing one. I like contrasting these somewhat serious-looking fictional models with sometimes silly or ludicrous functions, it's kind of hard not to be a little silly with a two-year-old running around in shoes made of PLay-Doh, even while I’m stressing over my super serious studio practice. At my day job, people use the things we make, and like my grandfather, people wear the jewelry he made and read time from the clocks he worked on.  As my work has become less utilitarian, and more time-consuming, it can be hard to reconcile the fact that these objects don’t facilitate everyday life the way a clock or a cup does.  These objects can take a couple of months to design and make which allows experiences/ events during that period to sometimes influence the work, which is very different and often, for me, more rewarding than the ways I at my production job.