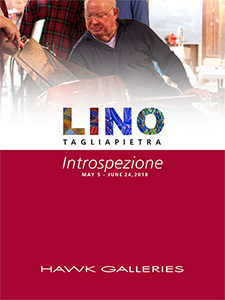 Lino Tagliapietra was born on the island of Murano (Venice), Italy, on August 10, 1934, and at the age of 11, started his life-long career in glass. After a short apprenticeship with Archimede Seguso, Lino went to work in the Galliano Factory in 1956, under the guidance of Nane Ferro. From 1966, he worked as a “maestro” at Venini, Murrina and Effetre International.

In 1979, Lino was invited to teach at the celebrated Pilchuck Glass School in Stanwood, 50 miles north of Seattle, Washington, co-founded by Dale Chihuly. Tagliapietra's generosity in sharing his expertise has been touted as instrumental in furthering the studio glass movement both in the United States and around the world. Through Lino’s many years of teaching/collaboration with other artists and his example-passionate love of the art, disciplined work ethic, and demand of perfection-the art of glassmaking has been dramatically elevated worldwide.

While working outdoors at Pilchuck and traveling around the region, Lino Tagliapietra was struck by the sight of sunsets and an occasional eagle or pod of whales. He also found his American students’ freedom with hot glass liberating and learned to experiment more boldly in the medium. Lino was hooked on the Northwest and has returned many times to teach and work. He eventually set up a permanent office in Seattle in 1994, from which his creations are shipped around the world.

Tagliapietra breathes both vitality and integrity into his works and uses the extraordinary skill honed during his decades-long work in the high-end factory environments of the famous Muranese glass firms, as well as his teaching/collaboration over the last 30 years, to create astonishingly beautiful objects of art that make our spirits soar.